And so it came to pass that…

…my partners in crime and I finally laid our paws on the Diablo 3 beta. Thanks to Blizzard Entertainment’s EU Open Beta Weekend, anyone (who had the patience to click the connect button over and over again on order to squeeze into the capped servers) could enjoy the first few quests of this, presumably, epic game. Yes, I am an avid fan of the Diablo universe, and most of the other Blizzard titles.

I wasn’t very impressed with the graphics at first but then I realized – Diablo 1, 2 and 3 are pretty much the same game except with some upgrades each in mechanics, graphics and storyline. And hey, my GF even sat down and played a Demon Hunter up until level 4. I knew she was the one… Haha she’ll kill me after reading this.

Oh well, the rest of this week will probably be spent either studying hard for the upcoming media test on Friday, or a lot of avoidance on Battle.Net (I’m vinq, gold Terran on the EU ladder), or perhaps a mix of both. If all things fail school wise I still got a strong sense of academic accomplishment to draw on… For now. 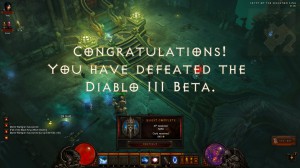