This weekend is a great weekend for geeks. Nay, it be a glorious weekend for all of mankind.  Reason being mainly that the Gamex 2012 gaming expo opened today, right here in Stockholm, Sweden. (See photo gallery below post).

We’re honoured with visits by top gaming companies and sponsors from near and afar, sneak peeks on upcoming titles such as Halo 4 and the new Sim City, and of course, lots and lots of swag and insane discounts (got a PlayStation 3 500GB for around 1800 SEK. Yes.) 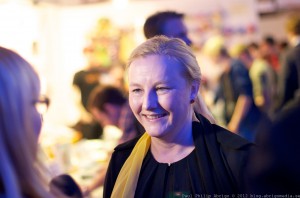 Gaming should be taken seriously both as a booming industry, as well as a strong, contemporary cultural expression. I’m happy to see that our Government does take gaming seriously, seeing as our Minister for Free Trade Dr. Ewa Björling inaugurated Gamex 2012. I met our Minister for Free Trade at the inauguration of the way more high profile World Expo in Shanghai 2010, and seeing her open this gaming fair sure was neat. This is what Dr. Björling had to say to Abrigo media about Gamex and the Swedish gaming industry:

”It’s great to be here. The gaming industry is a very important industry for Sweden, an industry which has doubled its turnover in a very short time, and 90% of that is export. You could say that the ’Swedish gaming wonder’ is what’s succeeding the ’Swedish music wonder’.”

Which is true. You’d have to be from like, the Void, if you haven’t noticed that the gaming industry is expanding quickly and steadily. So what’s a kid to do to earn some money and make a career in gaming (besides moving to Korea to try and become supernaturally good at SC2)? Dr. Björling gives the following advice:

”It’s always good to have a good education. Then you need a network of people in the business, so that you go out in the world already holding good hands”. But how does one get a good education suited for the gaming industry? While checking out a really cool indie game called Secrets of Grindea, my eyes (and lens) caught a booth called Future Games. Lukran Monks (not sure if I got his name right), told me all about this school in Stockholm where the teachers are all professionals from the gaming industry. And what’s cool is that nowadays, the gaming industry is not only for the Big Bang-theory sort of scientific masterminds, since the games also do require vast amounts of intrigue writing, story telling, creative artwork and all that kind of stuff (yes, you know exactly what I’m saying here). Lukran also sees the Swedish gaming business as a promising one, or as he put it:

”The games industry at the moment is the most successful in Sweden. It’s the one where the fewest companies are closing down”

One thing that struck me at this huge expo was how very mixed the crowd was.Of course you had your standard cos-playing girls and boys, your hordes of Dr. Pepper-consuming preteens and the competitive FPS-type of guys. But they did not constitute a majority. I saw lots of parents exploring the gaming world with their kids, couples walking about trying to find ”their” genre, and of course, a huge bunch of journalists, bloggers and photographers… The Swedish radio channel P3’s show “P3 Spel” had a recording session, and I must say I found Samson’s insightful feature on gaming seen as a cultural expression to be the most intriguing. Be sure to tune in Sunday to hear it (in Swedish).

So I asked my friend Ronny Chan who’s running the gaming blog Spelbart – what makes a gamer today, and who is s/he? He replied: ”Well, the thing with gaming today is that everybody’s playing, not only us geeks.” After looking out on the heterogenic crowd before us he confessed: ”…and I’m not sure how I feel about that.”

Before we finished our interview, I had to ask our Minister for Free Trade if she personally enjoys being at a gaming expo. Here’s what Dr. Björling had to say:

”I discovered gaming through Sonic the Hedgehog, which was nineteen years ago. I’ve played a lot of Mario Cart, and that’s the only game I still beat my kids in. Now I haven’t got that much time for gaming, but I do play Word Feud with my Father, who’s 80 years old”.

And how cool isn’t that? Well, happy Halloween kids, keep safe and see you around. Probably on the PlayStation Network.